Five Surprises Across the Front Desk 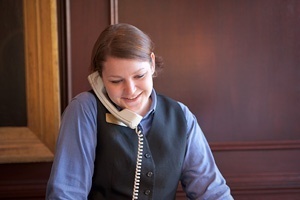 People always ask me for the ROI of training a front desk staff and I am always a little stumped. It’s a logical question. If you are spending money on training, it only seems fair that you would expect some sort of return, but quantifying that return becomes the tricky part.

What for example is the ROI on wearing pants to work? Again, logical question, pants can be expensive, and sometimes not all that comfortable. It might be so much easier if we didn’t spend money on pants and just didn’t wear them. But then you have some other issues that might arise. Some issues you can imagine – people staring, people uncomfortable, people calling the police. But then there are also some unforeseen issues that might occur, things like getting hot coffee spilled and getting your legs burned or backing up into a cold metal pole and getting your skin stuck to it. You get the picture.

The same is true when considering how much to invest in your people. Obviously you have to train them to use a computer, otherwise they can’t check guests in and out and collect their payment. But what about those soft skills – smiling, making people feel welcome, getting to know customers? What exactly is that worth?

I just spent the last two weeks on the road and stayed at five different hotels in three different cities in the Phoenix, AZ area. As I was sharing some baffling experiences I had on my trip, it occurred to me that this information might help quantify that pesky ROI question.

Surprise #1 – I called a hotel and shared that I had found a good room rate on a third party hotel site and asked if there was a difference between booking it there, or booking it directly with the hotel agent. The agent’s response? “Oh, you can just book it online, there’s no difference.”

There might not be any different to that front desk agent, but to the owner of that hotel, booking online at a 3rd party site is going to cost plenty extra. At least 10%, likely closer to 20%, more of the room rate in fees will be the cost. Also, he had me on the phone and I would have made the reservation right then and been done with it. However, once I hung up and went online, I found another hotel I liked better and chose to book that hotel.

Surprise #2 – I called three different hotels to find out what was going on in Phoenix that weekend because I was coming in for business during the week and thought I might extend my stay. All three agents (three different hotels) shared the same thing – absolutely nothing. No sports games were scheduled so really, there was nothing else to do.

Even if the best baseball team in the world was playing or the best football team in the universe, I wouldn’t have stayed for that game. If the desk person would just have asked me what kinds of things I was interested in they would have realized how easy I was to please – good food, good wine, good shopping. My guess is, I could have been pretty easily convinced to extend my stay a day or two with even the smallest amount of effort and the personal recommendation of the desk person about some fabulous new restaurant in town.

Surprise #3 – I called a hotel I was staying in to extend my stay for an extra day. The agent told me if I wanted to extend my reservation the price was going to be $100 higher than what I had originally paid, but then he suggested that I go onto priceline.com, where I had booked originally, and extend through them to get my same discounted rate. I did and saved that $100, thanks!

Not only did this cost the hotel $100, it also cost a bit more because of those 3rd party fees.

Surprise #4 – I called a hotel front desk where I was staying in Arizona because I had no air conditioning and it was very hot. They told me they would send maintenance right up to look at it. 45 minutes later I called again and they explained to me that maintenance was at dinner so he would be up after dinner. 45 minutes later I called yet again and they said, “Oh, do you still want him?” Finally he came and told me there was nothing he could do to fix it. As I was checking out the next day, I mentioned to the front desk person who was settling my bill that I had no air conditioning and her comment to me was that she wished I would have called her because she would have done something about it, but since I didn’t tell anyone, there was really nothing they could do.

What’s the cost of the bad review I left on TripAdvisor? Or the 450 friends I shared this with on Facebook?

Surprise #5 – I checked into my final hotel and realized I had left my phone charger at my previous hotel. Unfortunately I do this a lot. I called to the front desk and asked if by chance anyone else had left one that perhaps I could borrow. The front desk agent said, “Let me check and I will call you back.” In about 30 seconds he called me back and said yes, he found one and I could keep it all week! He even offered to send it to my room. This may seem like a small thing but as I said, I do this a lot and every other time I have called to the front desk and asked this question I never get this response. I always hear, “Well, housekeeping might have some but they are closed”, or ”No, we can’t give you someone else’s charger!” It is so frustrating because I know there is a box somewhere in that hotel with 1000 chargers, yet I have to go out and buy another one. And so to hear this nice person tell me that I could use one, that I could have a charged phone without having to get in my rental car and drive to some store and buy my 100th charger made me so happy.

And the upside for that hotel? I am in the process of moving to the Phoenix area, and I will have friends and family coming to visit for the next five years at least – and I will send them all to stay at this hotel, not just because they gave me a charger to use for the week, but because they were expedient and genuinely concerned with helping me. The charger example was only one of several pleasant service surprises I received from this hotel during my brief stay. Clearly, the owner and manager of that property understand the value of training a staff to deliver a good customer experience.

If you are feeling a little skeptical about these surprises, I recently recorded a couple of phone calls where I asked similar questions, just to see what the results would be. Take a listen for yourself and then feel free to tell me your thoughts!